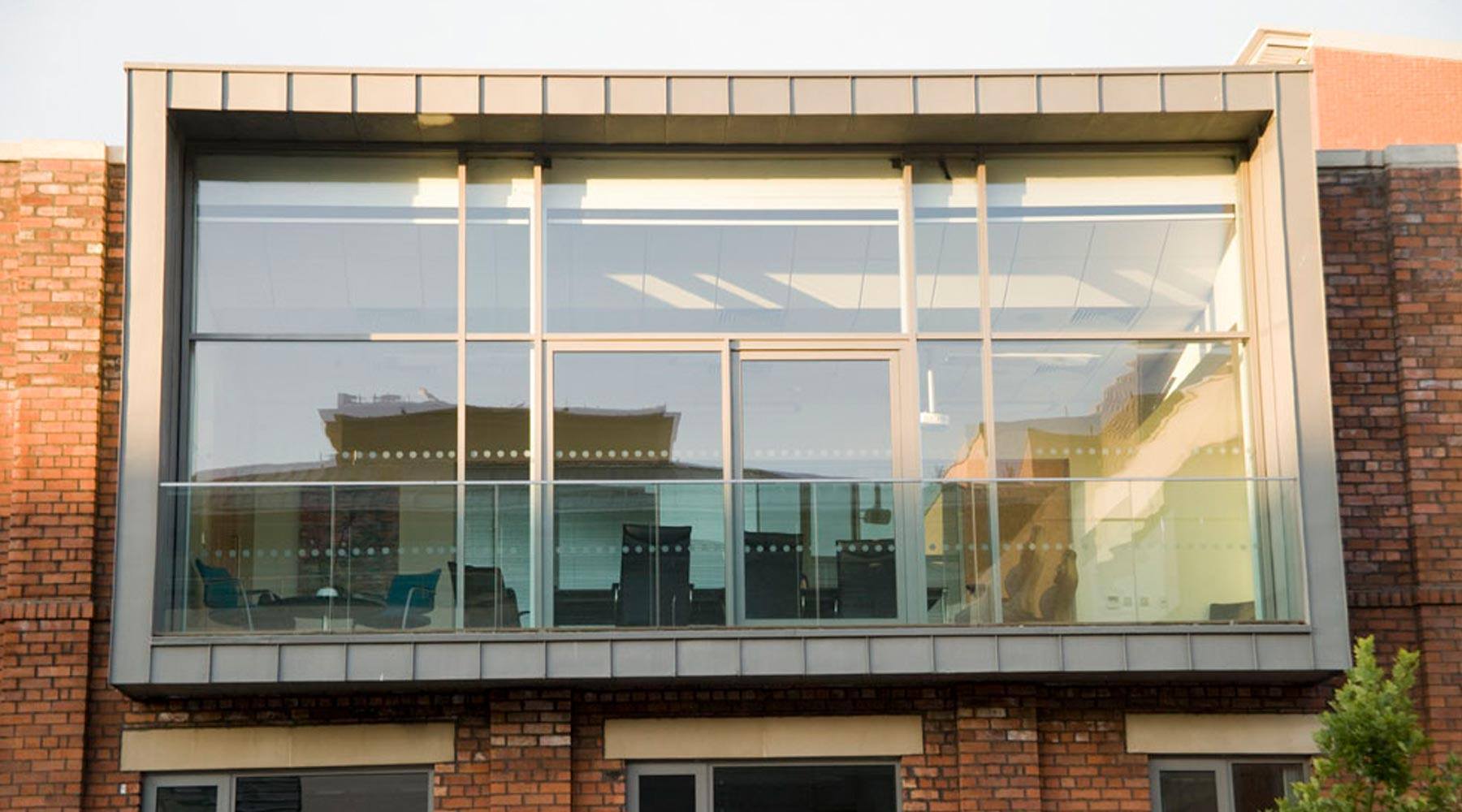 In January 2007, Robinson McIlwaine were asked by O’Reilly Stewart Solicitors (ORS) to assist them with a proposed move to new premises.  They had outgrown their existing premises at 114 – 116 Royal Avenue Belfast and wanted to relocate to a derelict building in May Street near the Royal Courts of Justice. While making this move ORS wanted to take the opportunity to ‘rebrand’ and present a more open, welcoming and contemporary image and wanted their new premises to project a new and more progressive image of their practice and to ‘announce’ this somehow through the alterations and renovations which would be required.

The project was an opportunity to refurbish a derelict building through a contemporary but sensitive remodelling in the historic legal district and Markets quarter of the city, an area of important townscape character. The building that ORS had looked at was a rather ‘sturdy’ looking red brick building probably built late 19th or early 20th century.  It was reasonably well proportioned, although perhaps a little ‘squat’ and looked as though it wanted to be a little taller.  The windows to May Street were simple and evenly spaced and the ground floor was divided into four structural bays by solid brick piers. 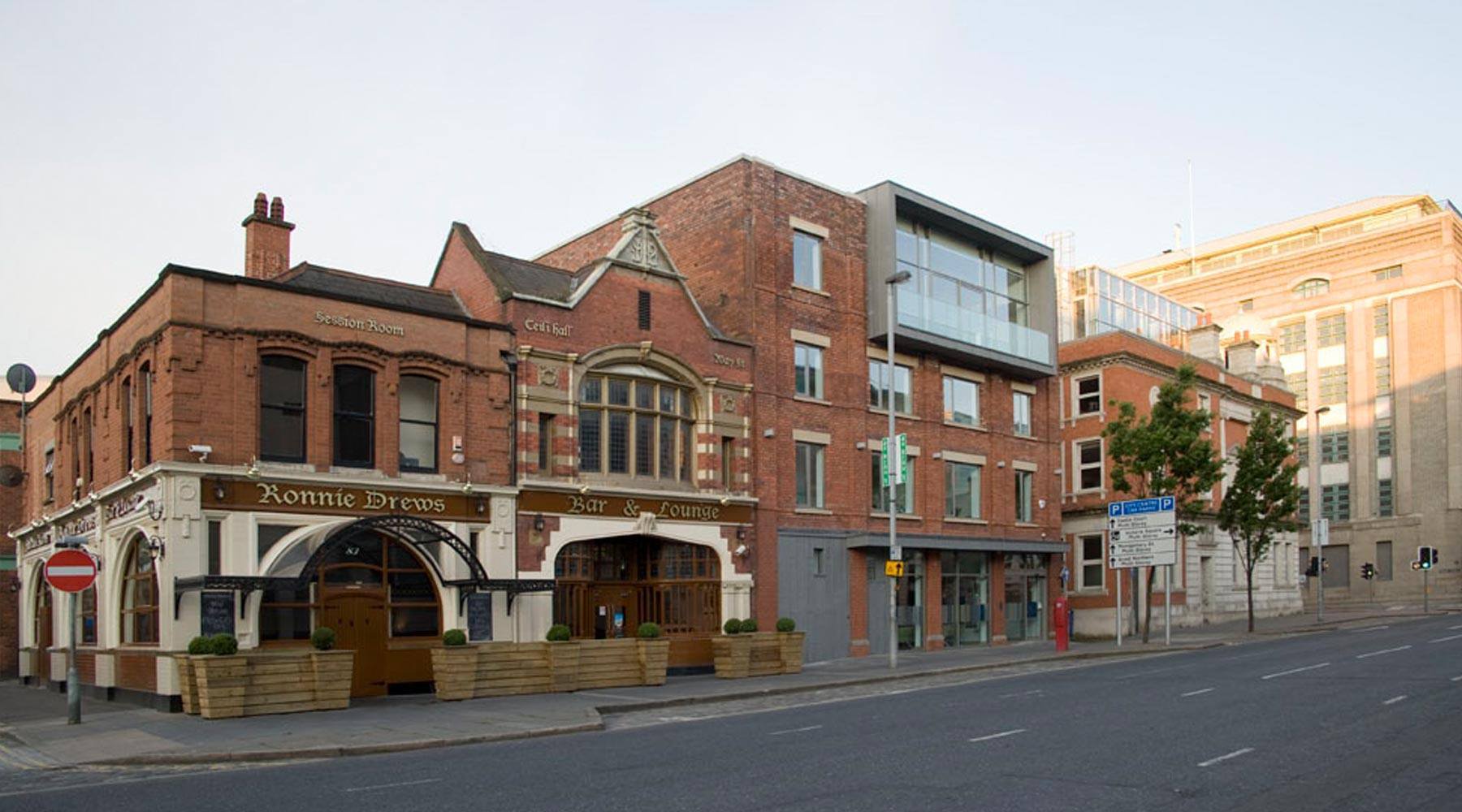 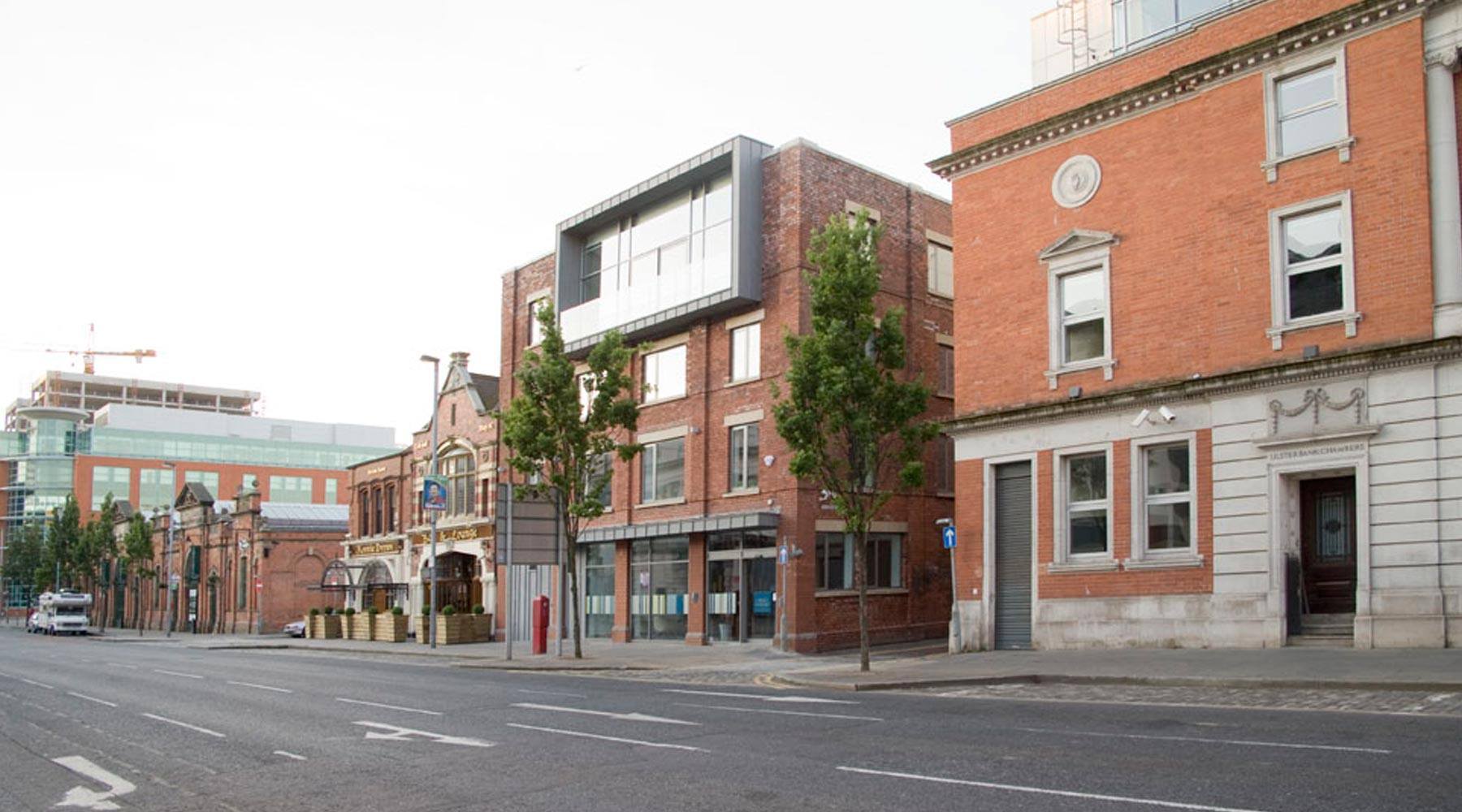 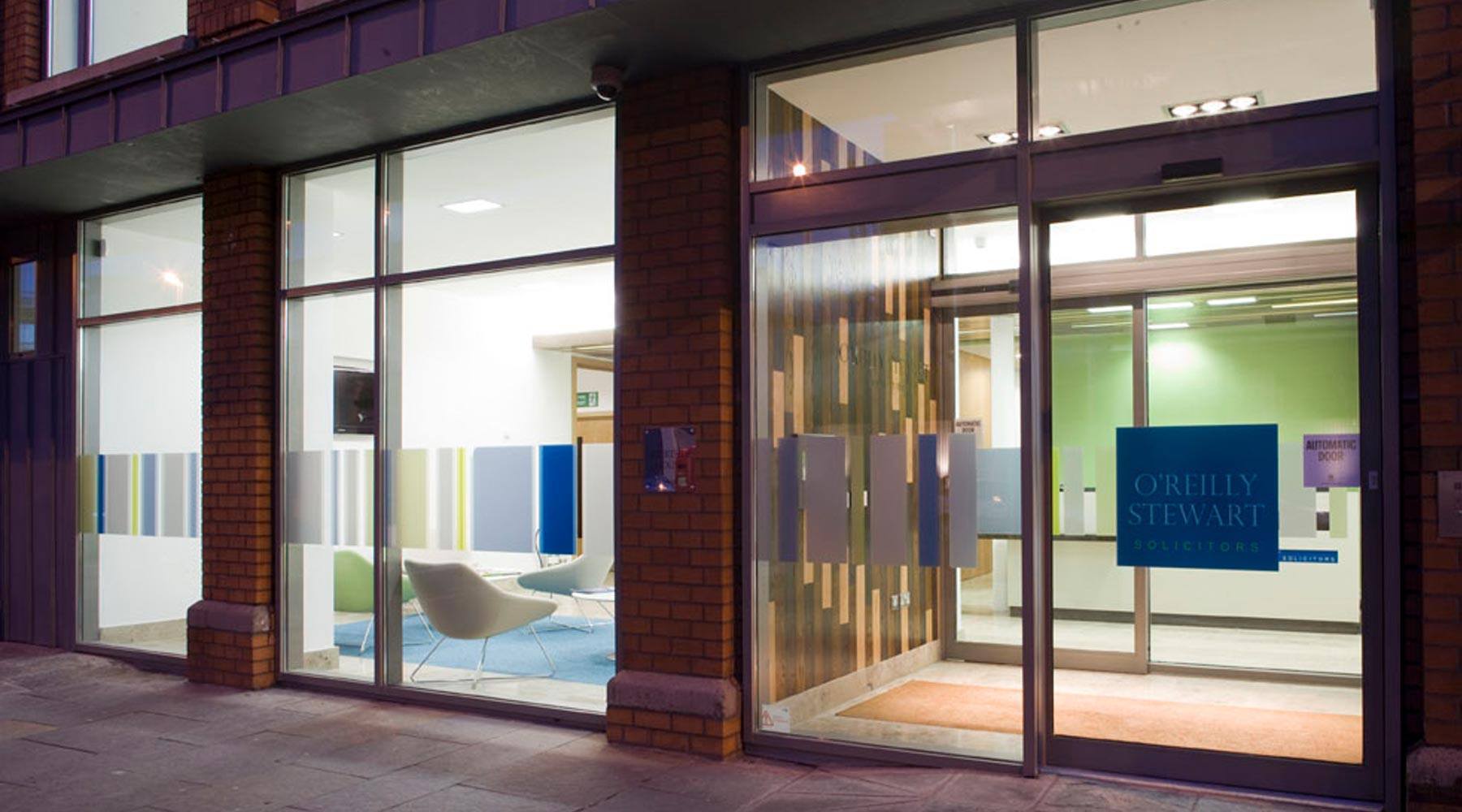 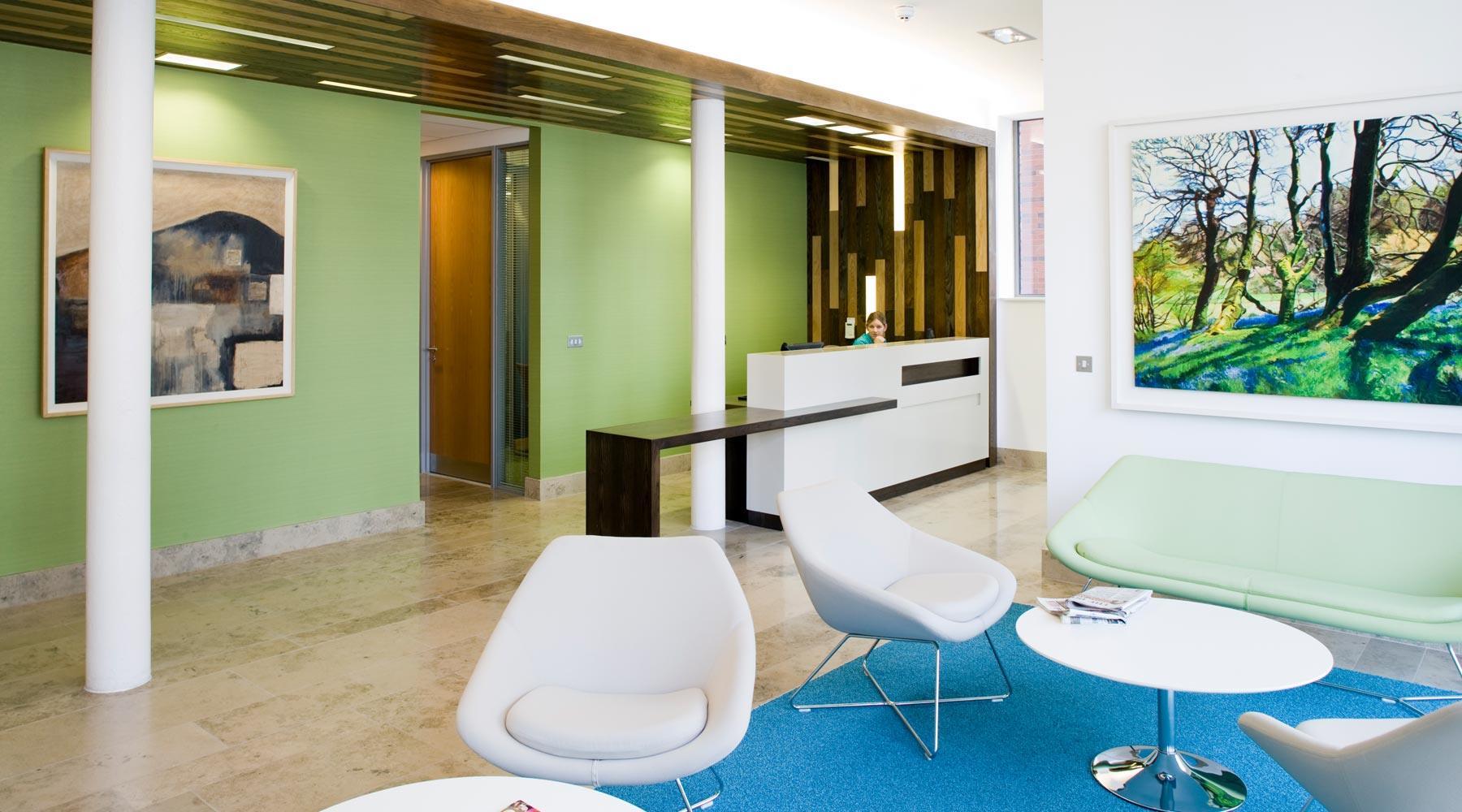 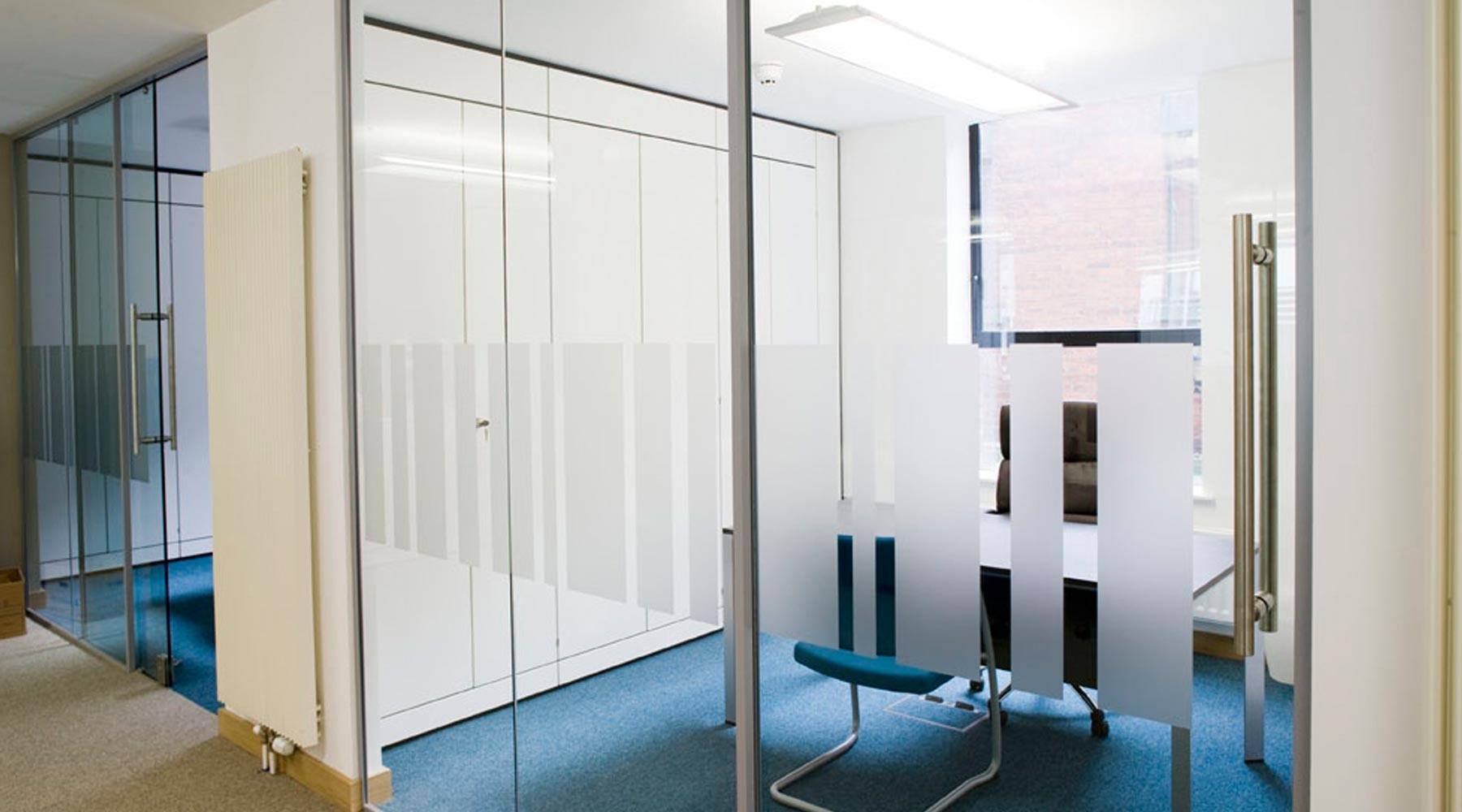 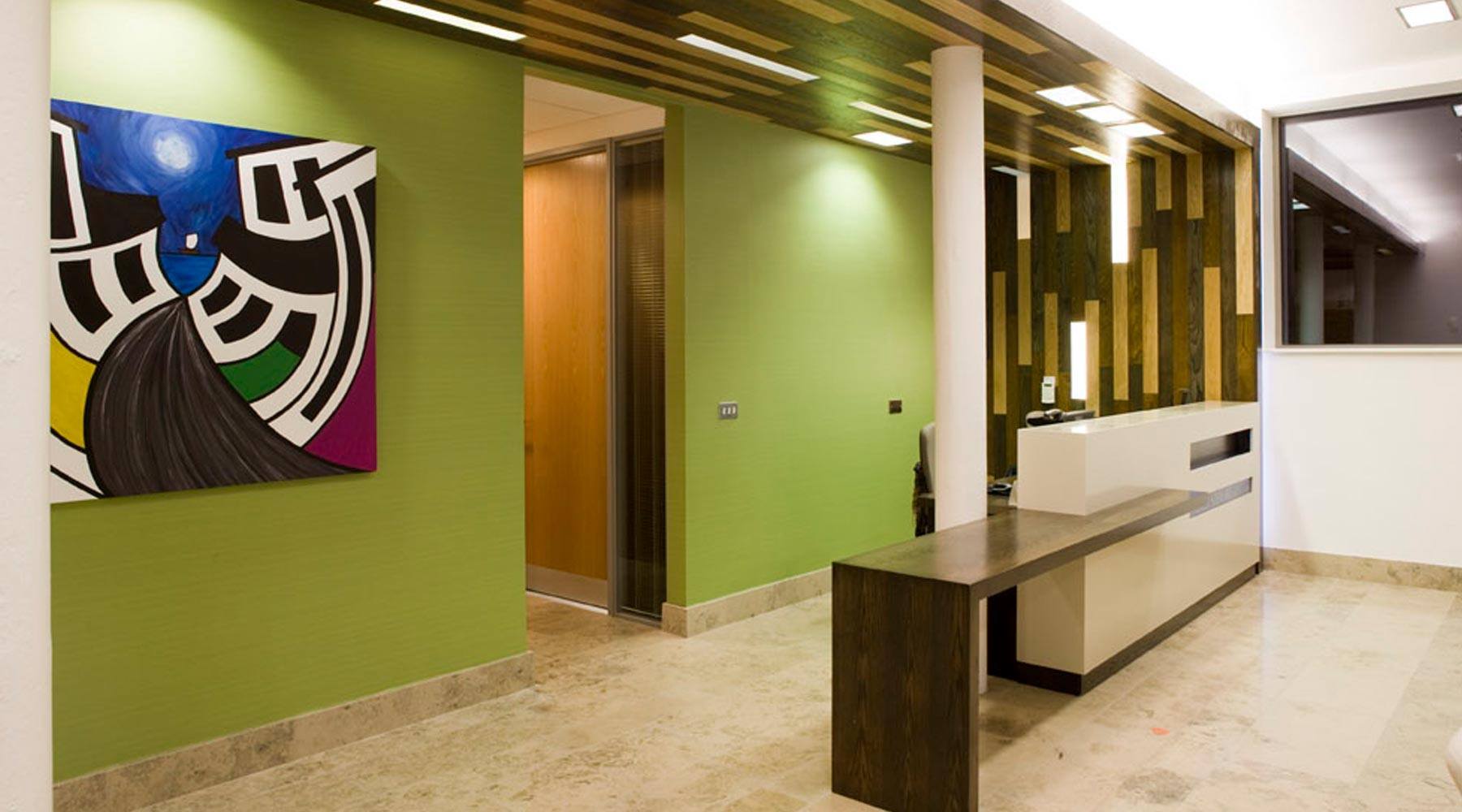 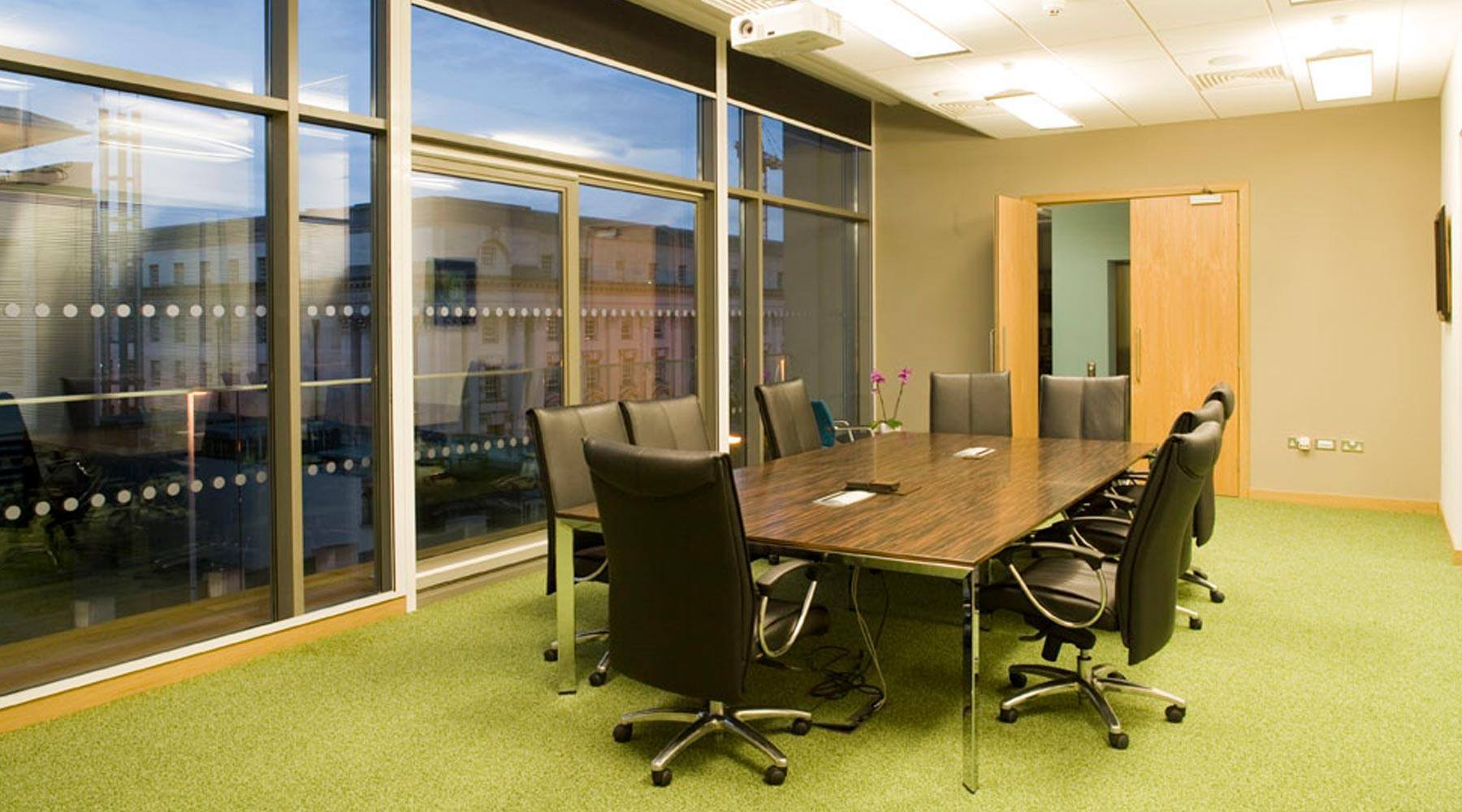 In respect of work with older buildings, whether listed or not, our focus is to understand the building as fully as possible.  We generally try to retain as much of the existing fabric as possible both to enable the building to ‘tell its story’ so to speak, and from a sustainability perspective to recycle or re-use where possible.  We believe that new ‘interventions’ in the existing building should complement the existing rather than copy it and for this project any proposed additions or interventions would be both distinctive in form and materials from the existing and would help to create the new and more contemporary image which ORS wanted to portray.

Internally a series of cast iron columns with four fins at the top supported the steel beams between which concrete floor slabs were laid.  We felt the columns and the fins were an important feature of the original building and something that we wanted to express, however the design evolved.

The sequence of approach, entrance and reception was a challenge. The brief required the creation of a secure and private but approachable street presence, and this was achieved by opening up the glazed screens to create a bright and inviting reception, but then adding coloured bands at eye level to avoid the feeling that seated visitors are in the public’s view. The feature overhang in varying shades of timber with integrated lighting elevated over the bespoke reception desk act as a focal point seen from street level.

The final layout of mixed cellular and open plan included a prominent conference room on the 3rd floor. This room later developed into the distinctive zinc box seen from May Street, the material chosen to compliment the elderly Belfast Brick facade. The boardroom, with its generous proportions, was further enhanced by the addition of the full height glazing and external balcony with its views across to the Bar Library and as far as City Hall. Carefully selected artwork by the architects with Chris Caldwell and graphics completed the space, integrating all aspects of the interior. 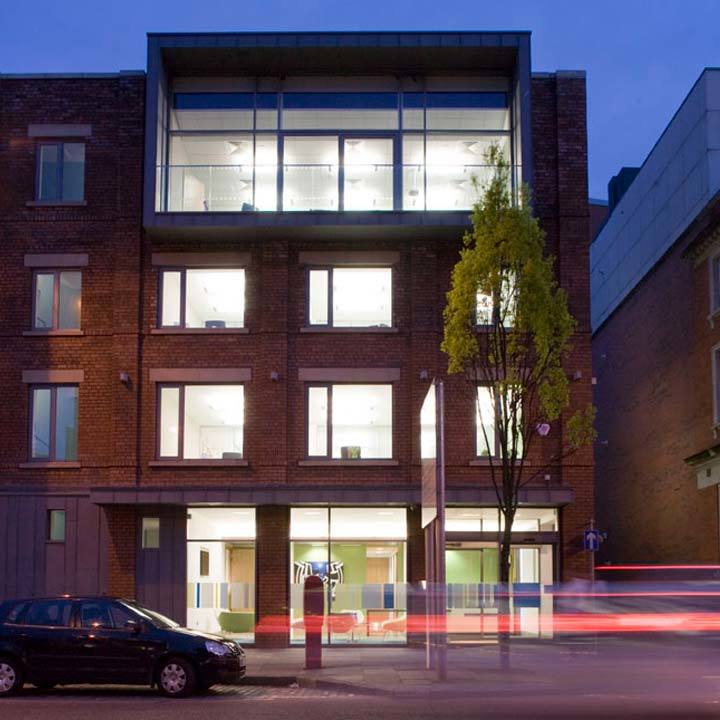 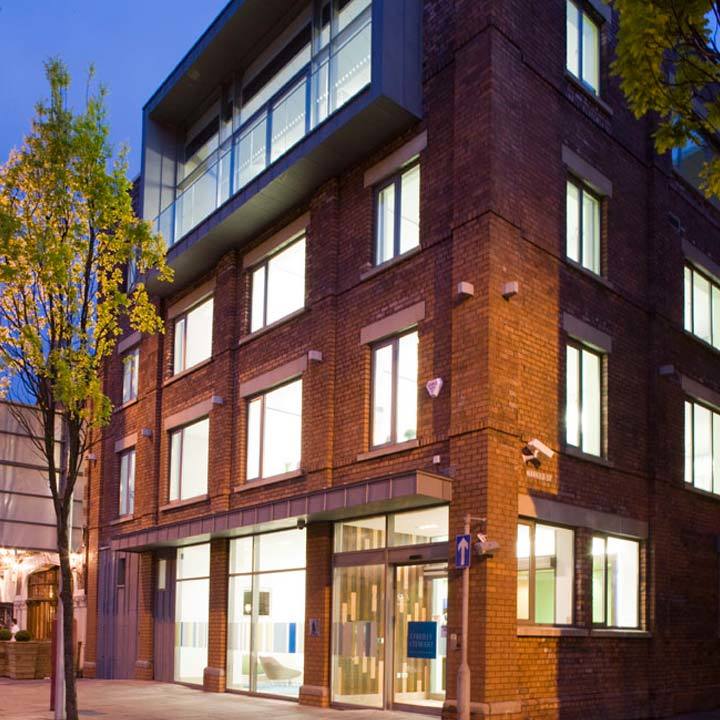 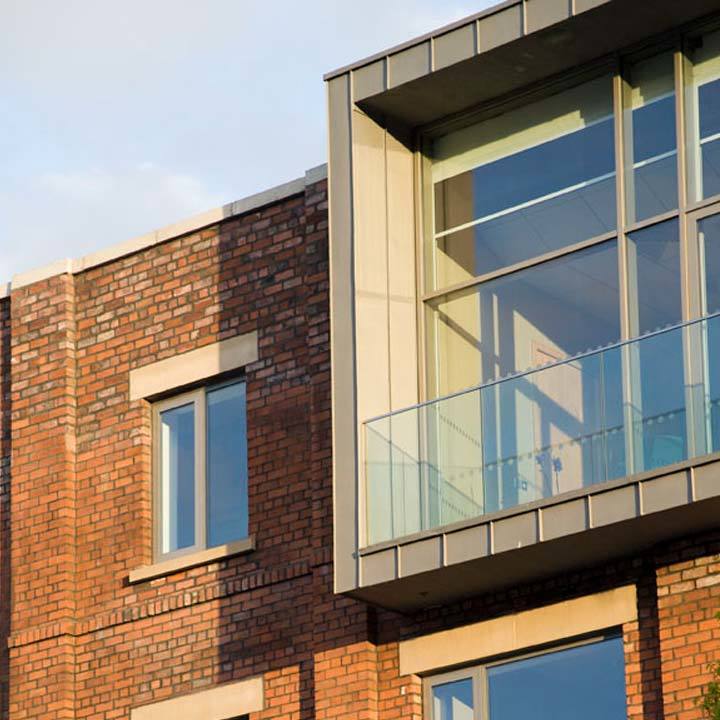 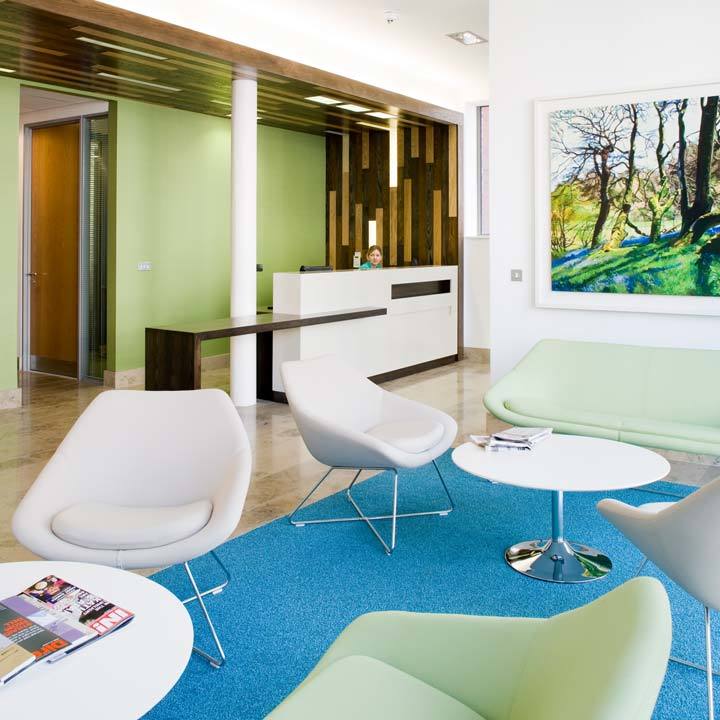 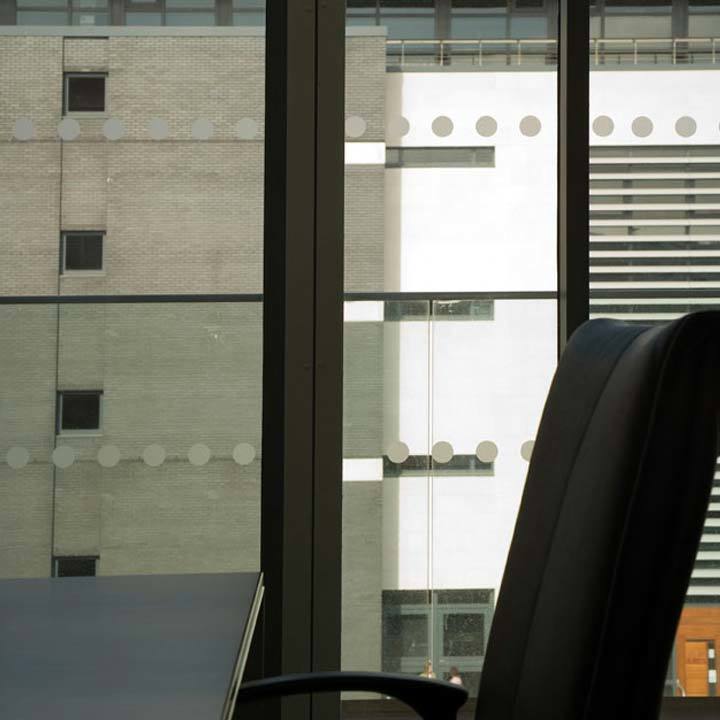 RMI LLP first became involved with the project in 2007 after being asked by O’Reilly Stewart Solicitors (ORS) to assist them with moving to a new premises. After investigating the potential of a number of alternatives the client opted to re-develop an existing building within Belfast Legal Quarter. The project was publicly advertised and tendered in a traditional form of contract which was subsequently awarded to Mascott Construction.  Operations commenced on site in November 2009 and completed in April 2010 on budget and as programmed. 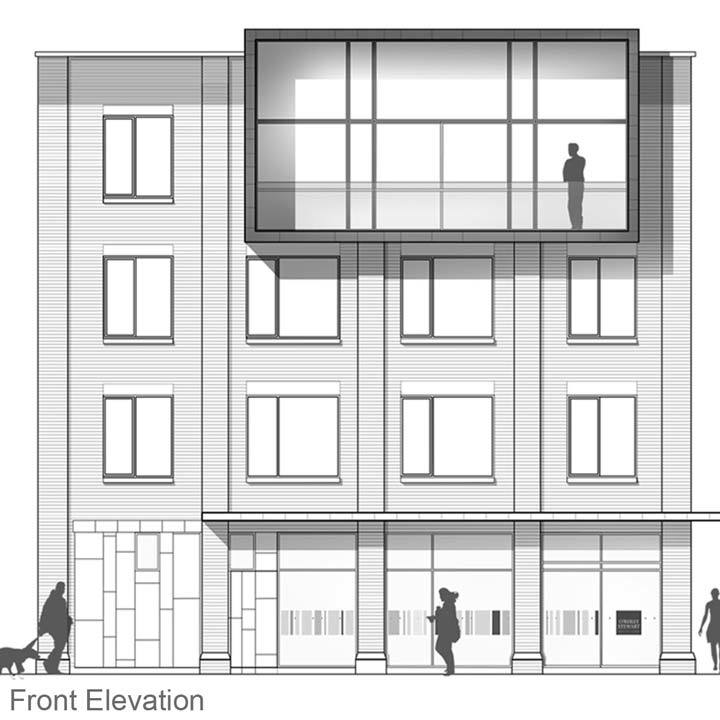 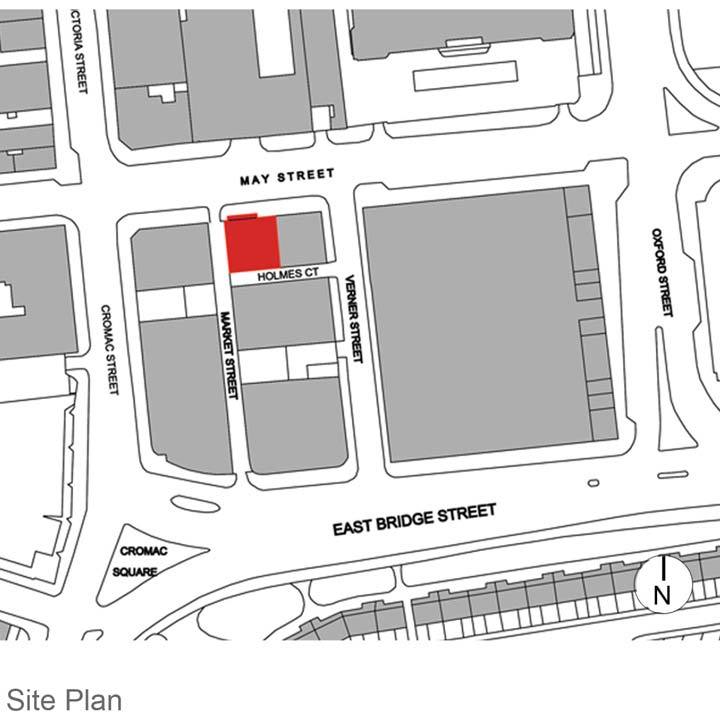 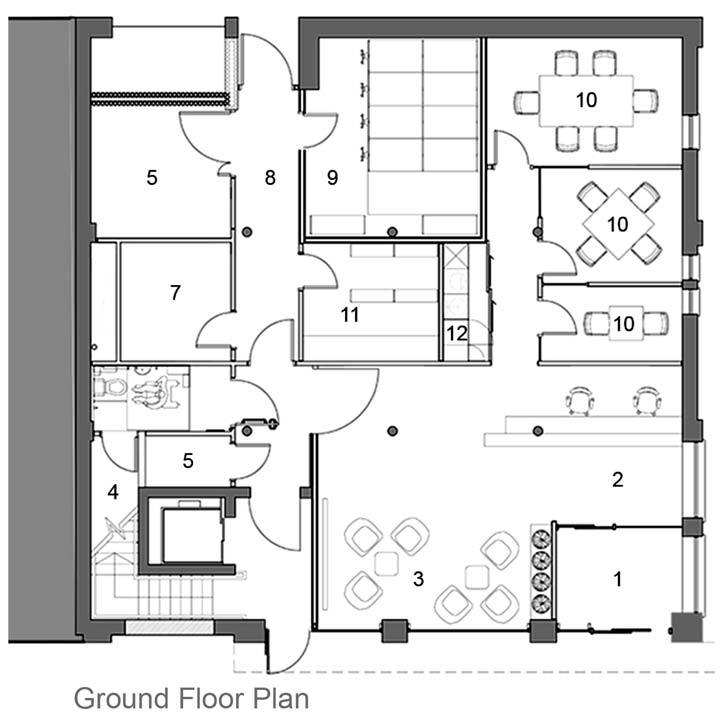 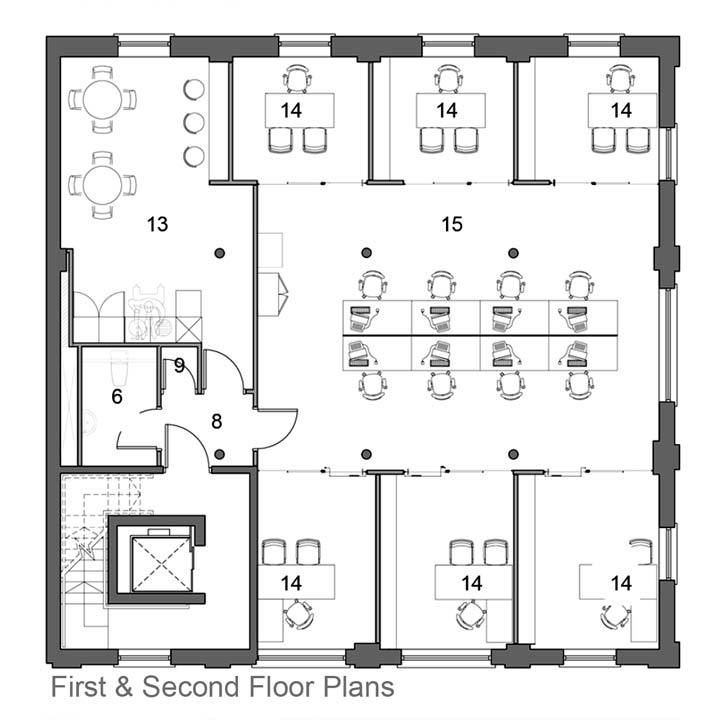 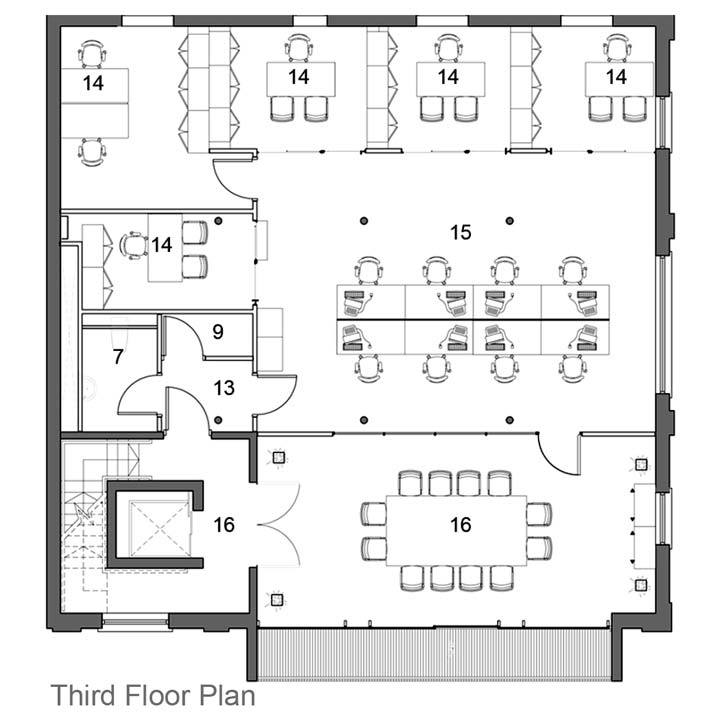